BCC has designed and developed a wide range of Manual Work Stations for different manual operations and conditions. These MWS are customized according to requirement and modularized. This means that MWS can be extended as production in the nursery increases.

Some of the standardized concepts developed for different projects around the world include:

Two-level MWS with fixed operator tables
Two-level MWS are more flexible and more suitable for larger operations and could also fulfill multi-functional operations e.g. setting of cuttings and packing of plants. These MWS’s consist of two levels, one for in feed and one for out feed. Conveyor belts are generally used for both in feed and out feed. Depending on the type of operation in feed can be on the upper or lower level. When setting cuttings, the lower level is normally used for in feed while the filled trays are fed out on the upper level. This minimizes the distance between the upper and the lower levels, reducing the distance the tray needs to be lifted by the worker.

Two-level MWS with tilt control operator tables
Trays are fed into the MWS via an upper roller conveyor with tray accumulating function. Persons are seated at individual operator tables, which are fitted with a pneumatic cylinder with a tilt control function. After trays are filled with cuttings/seed, the cylinder is activated to tilt the platform down and slide the tray onto the lower out feed belt conveyor.

Three-level MWS
Three-level MWS are commonly used for plant packing lines. Trays with plants are fed into the MWS on the middle level. Persons are seated at individual operator tables, which are fitted with a pneumatic cylinder with a tilt control function. After removing the plants from the tray and packing them into boxes or bags on the integrated operator tables (one platform for the tray and one platform for the packing box/bag), the empty tray is placed on the upper level. The cylinder is activated to tilt the platform down and slide the box/bag onto the lower out feed belt conveyor to be transported to the end of the line for further dispatch

Closed-loop MWS
Closed-loop MWS are used where a large number of persons are required in a relatively small area. The closed-loop station functions similar to a carousel, where the complete station is placed adjacent to the production line and connected by a transfer area. Trays are transferred into and out of the closed-loop by pushers and tray stoppers, which are controlled by queue-detecting sensors. 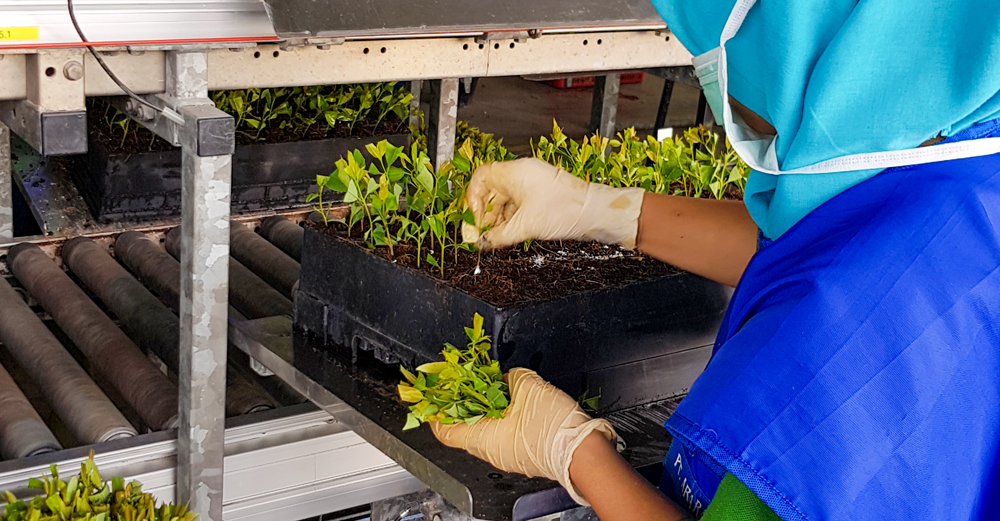 • Fully customized according to nursery’s requirements in terms of physical and budget limitations.

• Centralized production for improved monitoring and control of operations.

• Full integration into plant production lines through the use of accumulating roller conveyors, photocells, pushers and stoppers.